Our family went to New Zealand for a holiday and to celebrate our youngest son’s wedding on 25th January in Taupo. My husband and I stayed on and went north to The Bay of Islands to celebrate my significant birthday on the 31st. I had been dreading this birthday for the past two years. Everyone kept telling me that it was no big deal and logically I knew that. I had the knowledge to know that that was indeed the case, that it was just a number, that it would happen regardless, it was in fact inevitable (unless I wasn’t here!)

Last year I did a ThetaHealing® course called ‘The Game of Life’ and Hiro the presenter, was telling us about his experience of skydiving and how by jumping he overcame his fear. And so the seed was planted. Slowly it germinated, until I just knew that this was how this birthday should be marked. I needed something to significantly shake me up, blow the cobwebs away, and give me a different perspective on life! All the clichés worked so well to describe what I needed. Tentatively I told my husband expecting him to say ‘don’t be ridiculous’ but he didn’t, so that spurred me on. I then shared it with someone else and was very relieved when they didn’t respond that I was an idiot. The more people I told and the more I verbalised it the stronger became my determination.

I had decided not to tell my children because as I had always told them that I only wanted to know after they had done something dangerous, I knew they would just give me all the negatives. I told about 8 people in all and each time I spoke about it my resolve grew. There was also the realisation that there was no fear attached, amazing.

Six years before I had been up in a hot air balloon, at the time when I was told that was what we were doing the fear did kick in. I had had a fear of heights for as long as I could remember, I couldn’t even stand on the third rung of a ladder! Then I rationalised it with the fact that I had been guiding people on hot air balloon rides in my meditation classes for years. If I could do it in my mind I could do it for real. On the morning of the flight the only concern I had was what would happen if I needed to go to the toilet whilst I was up in the air! I needn’t have worried. I absolutely loved it. It was the most fantastic experience. It was surreal. It was awesome. If you get the chance – do it!

So, I decided that if I loved the balloon ride I could apply the same method to the skydive – and I did. The morning of my birthday dawned; I was up early to make sure I was ready in plenty of time. I was incredibly calm. I must say that my husband was very supportive; he hadn’t said anything of a negative nature since I first mentioned the idea to him.

We arrived at the skydiving place, I had the training, watched the video and got suited up. Then had to sit and wait for the cloud cover to lift. Fortunately I had taken a very thick book with me because we sat there for over 4 hours. The cloud cover had not lifted so we were told to go and they would contact us if and when the clouds lifted.  I didn’t think I had been nervous or anxious but on the walk to the car I said ‘I have to go back and have a sleep, I’m exhausted’. Back we went and both fell asleep, until we were woken by the phone to tell us the cloud had cleared. Back we drove and this time I did notice a slight nervousness as I suited up and put the harness on. Then we sat and waited … and the clouds returned. After 2 hours had passed it was decided that the jump was not going to happen that day (it is illegal to drop people through cloud) and they asked us when we could reschedule. We were flying out the next afternoon so we arranged to come back early the next morning.

We had planned to return to the beautiful island of Russell for a special birthday dinner. As we got to the ferry the rain started to spit and the clouds looked very ominous. It would have been a disaster to be caught in a storm on the tiny ferry and as we weren’t dressed for rain the plans changed quickly to dinner at a nearby restaurant.

The next morning bags packed we set out back along the road that was now becoming very familiar. I put on the same suit and then sat down on the same sofa to wait. The staff seemed quite upbeat so we assumed it was going to happen. There was a niggly feeling that it wouldn’t and I realised I was more nervous than I had been the day before. I wasn’t sure if this was fear of the skydive or a deep down realisation that it wasn’t going to happen. There was a sign behind the desk that read “If at first you don’t succeed. Then skydiving is not for you.” I took this on board and realised that the Universe really wasn’t going to let me jump. When it became obvious that time was going to run out we pulled the pin. We had a 3 and a half hour drive back to Auckland to catch our flight home.

As we walked to the car I was annoyed, relieved, and resentful. After all that hype what a disappointing birthday it had been, spending the day sitting in a hangar and then missing out on the restaurant we had planned. I was feeling very flat and did for days afterwards. I am sure it had to do with all the emotions that had been surging around, even if they were under the surface. The huge build-up from dreading the birthday and then deciding to ‘ramp it up’ by jumping out of a plane …. and then nothing. Nothing earth shattering had happened on the day, the clock ticked over and the next day I didn’t feel any different. The anticipation was indeed more exciting than the actual event.

How often does that happen in our lives that we build something up to be such a big deal and then the reality is nothing like what we imagined? We do it often whether it’s over things we are excited about or things we dread. Our imagination is incredibly powerful. 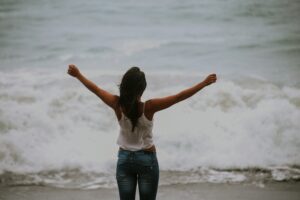